Oh boy, this is fun.

(If you want to read about the flight experience, scroll further down until you see the second photo)

I had the opportunity to try China Eastern Airlines last month when I treated my mom to a vacation in Beijing. The frugal side of me prevailed and booked the mentioned airline instead of Philippine Airlines. 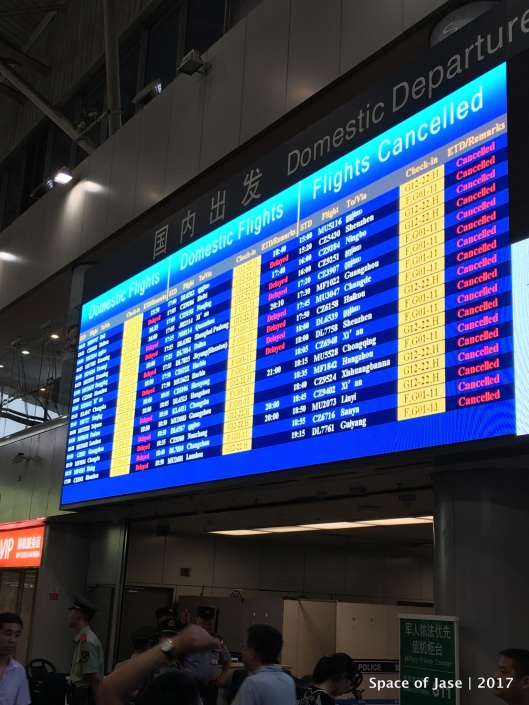 After four days of roaming around Beijing, it was time to go back home. Our flight to Shanghai Pudong, MU 563, was scheduled to depart at 5:15 in the afternoon. We left our hotel after having lunch and arrived at Beijing Capital International Airport T2 at around 2 in the afternoon.

We proceeded to the check-in counter but we were told to return after 45 minutes. Maybe we were too early, I thought. When we returned to the check-in hall of the airport, it was crowded and chaotic. I noticed that there was a white board put up with what looked like scribbles and flight numbers. Uh-oh.

I proceeded to the counter and we were told that flights were either delayed or being cancelled. True enough, when I checked the originating flight MU 564, it has not departed from Shanghai yet. Yikes.

I was very worried because our connecting flight to Manila would depart at 12:15 AM the following day. At first I was hoping that the originating flight from Pudong would depart soon, reach Beijing, and we can leave. But minutes became hours, the status still said it has yet to depart for Beijing.

Instead of panicking, I told my mom to stay in KFC and I try to find a solution to our dilemma. I lined up at the ticketing counter to re-book but I was asked to call a hotline that I could not reach. I tried contacting China Eastern Airlines through WeChat but the app was clunky. Finally, I went to the duty manager’s desk and waited for my turn.

I spoke to the duty manager using my broken Mandarin. He understood enough of what I said and told me to call the same hotline the ticketing office referred me to. I asked for his help as I could not connect to the hotline. He was able to refer me to a temporary ticketing counter for passengers whose flights were affected.

I went to the counter which was actually another check-in counter. The lady there tried to find me another flight but she said there were no other flights departing for Shanghai, whether be it to Pudong or Hongqiao. I accepted the fact that we won’t make it to our flight back to Manila so instead of choosing to wait in the airport, I asked her if she can re-book our flight to the following day and our connecting flight the day after that. After more than 30 minutes, she got me two seats on MU 5114 departing for Shanghai Hongqiao at 2 in the afternoon the following day. She also re-booked our flight back to Manila to Sunday.

I came back for my mom at around 9 in the evening and told her what just transpired. Before leaving the airport, I booked a room at Best Western Grand Sky via Agoda. I was very exhausted at that point and I just wanted to sleep.

When we arrived at the hotel, I showed the receptionist my reservation. While waiting, I sat beside my mom on the sofa across the reception. The receptionist signaled that I come and told me they do not have my reservation. They were fully booked. I wanted to scream but held my composure. The last thing I wanted my mom to see was me panicking. So I gathered my thoughts and remembered that I still have points in my SPG account. I booked Sheraton Grand Dong Cheng using my points. It was all the way back to the city center but I didn’t care. I requested the receptionist to call a cab for us and off we went to Sheraton.

At Sheraton, only the counter for SPG elite members had a receptionist. I went straight there even though I lost my platinum status a year ago. Summer Zhang was the receptionist. I showed her the screen capture of my reservation. Fast and efficient she was. She asked for my credit card and passport. After less than five minutes, we have our keys. She even gave us an upgraded room! I just love the service of Starwood. More on our stay in a separate post.

This is getting long.

We left the hotel at around 11:45 AM and reached the airport at 12:30. We immediately went to the check-in counter. Sadly, we were asked to return after 30 minutes. Knowing the possible outcome, I went straight to the duty manager and waited for my turn.

I felt bad for the staff manning the duty manager’s counter. A stream of expletives came their way – be it in Mandarin Chinese or English. One guy even splashed water at the duty manager out of frustration. There was a family of Americans who looked defeated as they couldn’t get seats. It didn’t look too bright for me.

When my turn came, I asked the duty manager in the nicest way I can (in broken Mandarin, no less) if we can get a seat to the next guaranteed flight to Shanghai. I explained that we were supposed to be in Shanghai before midnight as we have a connecting flight to Manila. I banked on my charm instead of being demanding.

The duty manager asked for my passport as well as my mom’s and made a call. After around 10 minutes, he told me that he would issue us chance passenger tickets to MU 5152. The flight goes to Shanghai Hongqiao and it was supposed to depart at 11:30 in the morning but due to the delays at the airport, it will be departing at 2:45 PM. He instructed me to return at 2:20 PM because he had to ensure that the seats were indeed available and if so, we can check in our bags.

When I returned, he happily told me that our seats were confirmed. Hooray! We checked in our luggage and went through security.

Upon arriving at the gate, we discovered that the flight is delayed by another hour. When I checked the originating flight, it was about to arrive. Knowing that gave me some relief. Better delayed than cancelled, I mused.

Finally, the plane arrived. A few minutes later, they announced that it was ready for boarding. Oh joy! 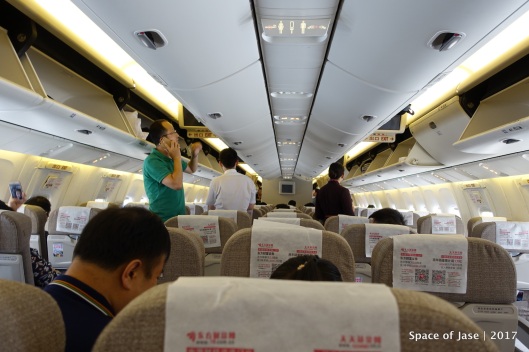 The plane was an old Boeing 767 operated by Shanghai Airlines. I had a 2 – 3 – 2 configuration in economy. I found the seats comfortable with generous leg room and width. No in-flight entertainment though.

As with our flight to Beijing, they served meals on our flight back to Shanghai.

Nothing extraordinary. The beef noodle dish lacked taste. The side salad featured a slightly chewy piece of beef. There were two desserts – fruits and glutinous rice balls. It’s the stereotypical airline meal.

We arrived in Shanghai Hongqiao at 6:05 PM. Mom and I were obviously glad! 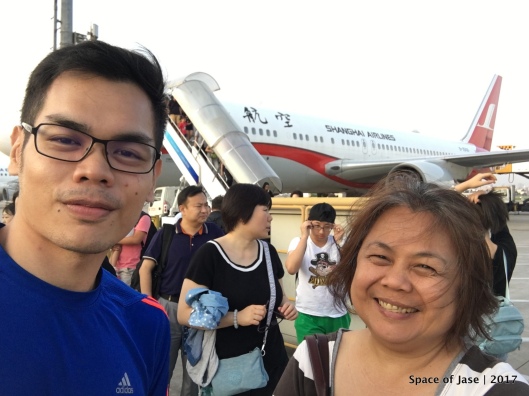 I look stressed out. My mom’s still jolly.

We took our luggage and went out of the arrivals area. I had to choose between taking a bus or cab to Pudong airport. Acknowledging the fact that both of us were tired, I opted for the cab option. I thought it wouldn’t be that expensive.

We arrived at Pudong airport at 7:30 in the evening. It was too early for us to check in so we went to KFC to have a light meal. At 9:00 PM, we were able to check in.

The flight back was very uneventful. We were served the same snacks on our way back. We rode a 737 which was a bit more cramped compared to the 767. The service was okay at best. Nothing special. I had to speak in Mandarin Chinese in order for the flight attendants to understand what I was asking for.

By 4:00 AM, we landed in Manila. I was never happier to have reached Manila.

So, after this experience, will I ride with China Eastern (or any Chinese Airline for that matter) ever again? Well, apparently yes. I booked a flight with China Southern the week after our trip to Beijing. The delays were not of the airline’s fault but the airport’s. Would I recommend China Eastern? Maybe not. I would probably use it again if the price is right. For now, I will stick with my usual options which are Philippine Airlines, Cathay Pacific, and Singapore Airlines.