These past two years, I have been sticking with Philippine Airlines more and more for my travel. Why? Mabuhay Miles, of course. It may not be as powerful as other loyalty programs because of PAL’s non-membership to any of the alliances but it suits my needs fairly well.

There are exceptions though. When the airfare is too good for me to ignore, I grab it. Case in point, my recent trip to Beijing. I promised my mom that I will bring her to the Great Wall on her birthday. I was about to book two tickets to Beijing via Philippine Airlines at 545 USD when I saw China Eastern Airlines’ promo — 400 USD for two. I booked the tickets immediately.

China Eastern Airlines is the first Chinese Airline I ever tried. Was I excited before the flight? Quite. I was wondering if I’d hear the welcome spiel I memorized from one of my Mandarin lessons (spoiler: I didn’t).

Our journey started early at Manila – Ninoy Aquino International Airport (NAIA) T1. There was a long queue for China Eastern which only has one flight per day from Manila (MU 211) which departs at 4:55 in the morning. Many of the passengers had onward flights from Shanghai, just like us. I tried checking in online using their website while in queue because there were only two people at the bag drop counter. No luck as the website just kept on loading. I gave up and just waited for our turn.

Mom and I headed straight to the MIASCOR lounge after immigration and the security check. NAIA T1 is much better than terminals 2 and 3, in my opinion. Good thing the renovation had a good outcome.

When boarding time came, we headed to our gate. China Eastern Airlines utilizes one of the lower gates in NAIA T1. Our flight was slightly delayed and we boarded 20 minutes after the supposed boarding time.

To my mom’s delight, she was given a window seat. I sat beside her. The aircraft was an Airbus A320. I immediately noticed how cramped the seat was. 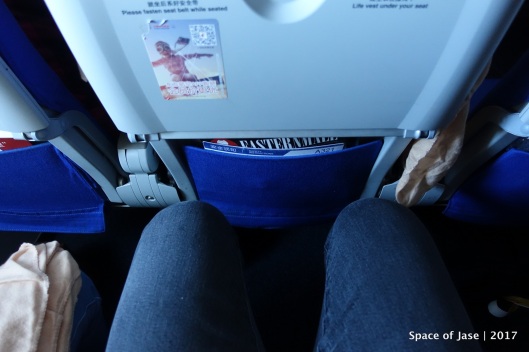 Seat width was very narrow whilst the seat pitch was okay at best. As you can see in the photo above, my elbow was spilling to my mom’s area already. I am 183 cm tall to give you an idea.

In-flight entertainment was limited. There were no personal screens but there were overhead ones. I didn’t bother plugging in the headset. Instead, I chose to listen to music in my phone. 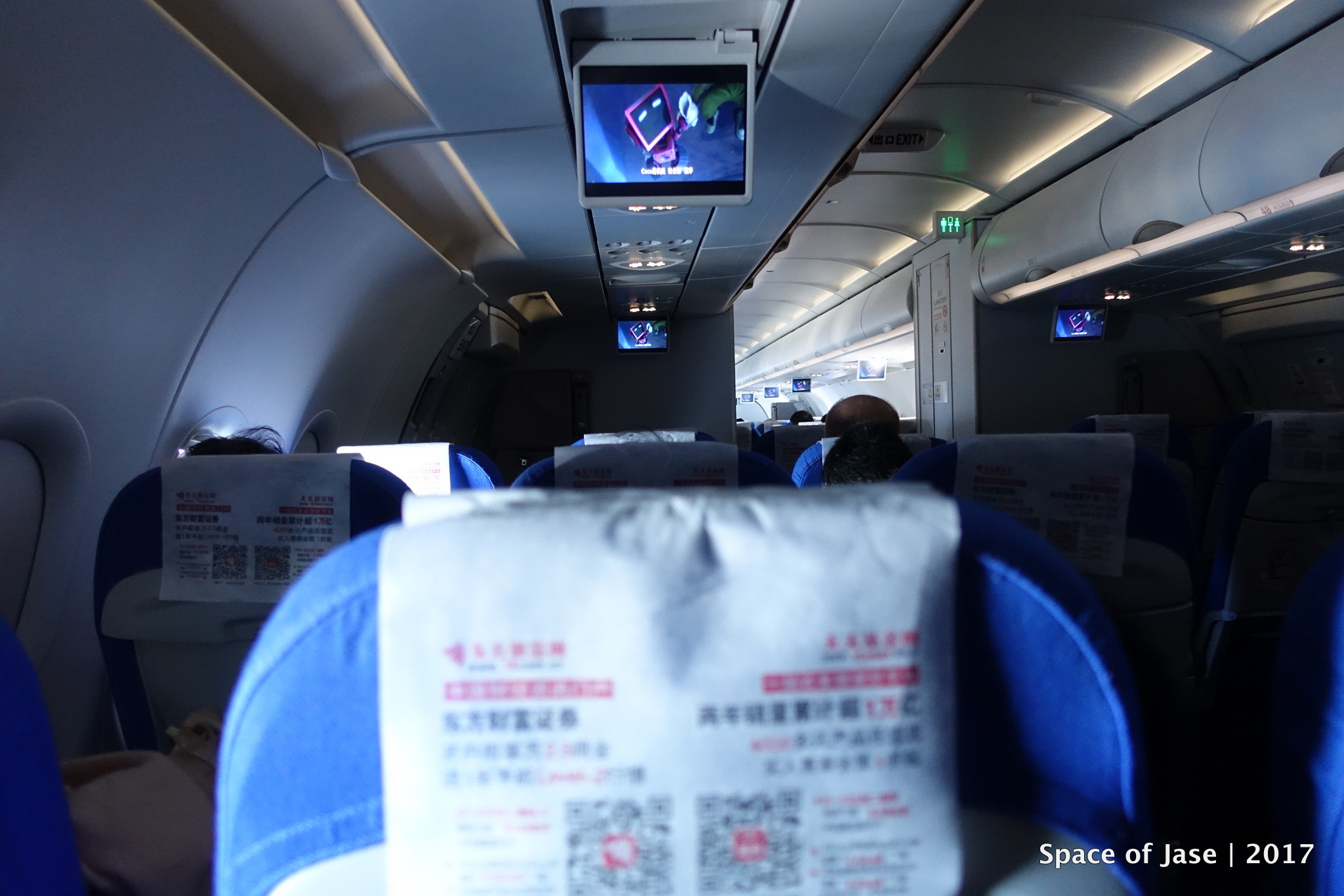 Unlike other airlines which ask you to switch your mobile phone to silent mode, China Eastern asks you to power off your mobile phone. Their announcement fell on deaf ears. People were still tinkering with their phones during the flight. 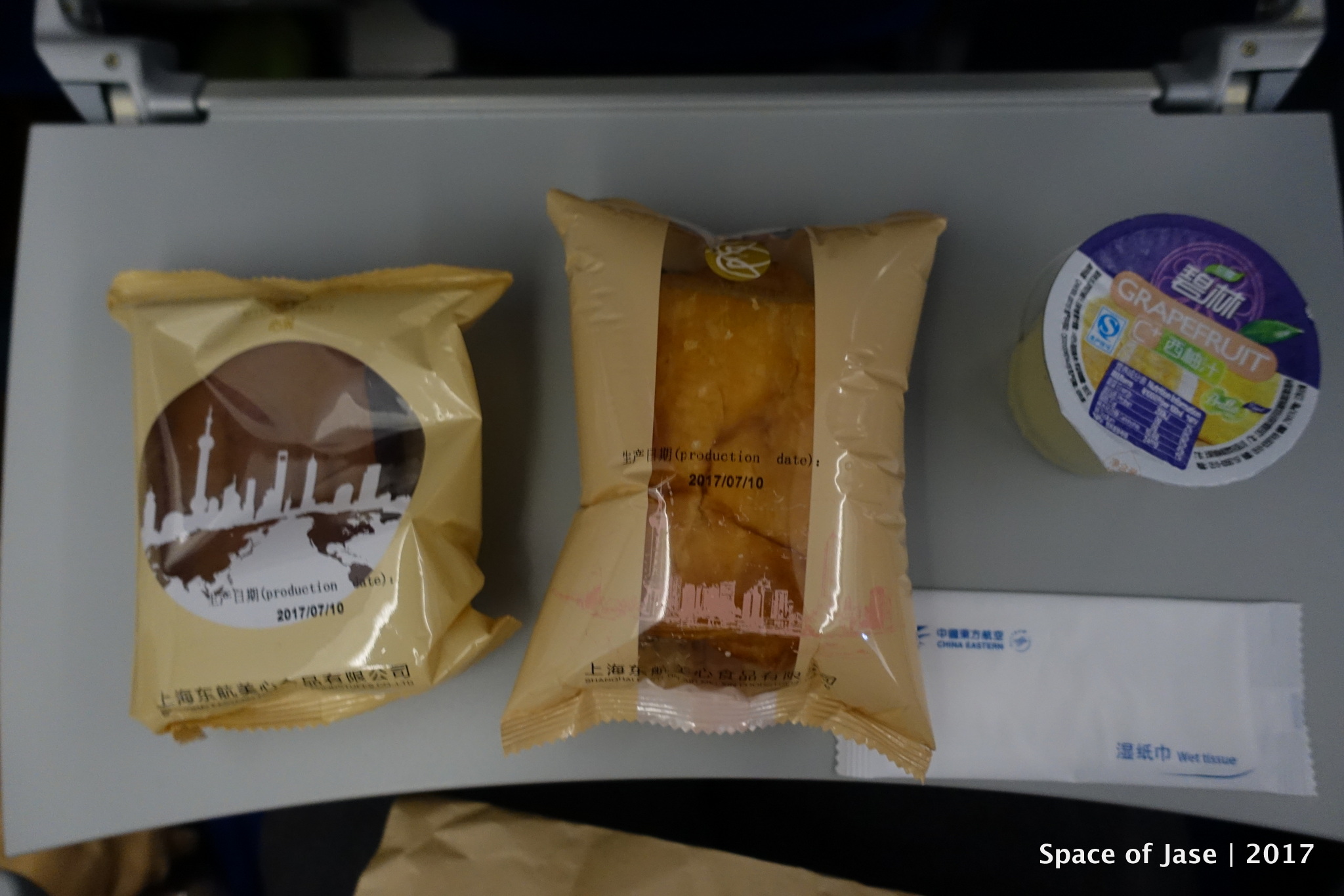 Not so fun. China Eastern Airlines served us a ham and cheese croissant, a slice of chocolate chiffon, and a cup grapefruit juice for a three and a half hour international flight. I had a better snack with Batik Air back in 2015 for an hour-long domestic flight from Jakarta to Semarang.

Another thing I noticed is that though the flight attendants were nice, they had a difficult time speaking in English. When I asked for a cup of water, I had to repeat it in Mandarin.

We landed in Shanghai Pudong Airport at around 9:30 in the morning. Odd that we didn’t use the jet bridge. We were shuttled by a van to the terminal.

Given that we had a domestic connecting flight, we had to claim our luggage and check them in again at the transfer desk.

Quite easily done. I was expecting Shanghai Pudong Airport to be a fancy looking one but it was okay at best. There were limited food options past the security check. Mom and I ended up having overpriced noodles in one of the stalls.

The onward flight to Beijing was uneventful. It was likewise slightly delayed but not by much.

The aircraft for our flight to Beijing was an A330. It was roomier than the one from Manila to Shanghai. I wasn’t able to take much photos anymore inside the plane as I fell asleep as soon as we took off. I only woke up when the in-flight meal was being served.

After the not-so-nice meal from Manila to Shanghai, I didn’t expect much for the Shanghai to Beijing leg. I was pleasantly surprised.

Beef with rice, cold cuts, fresh fruits, and lemon biscuits. I hardly touched the rice but I did enjoy everything else. 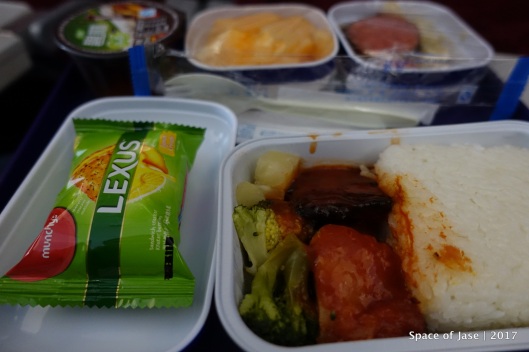 Our flight was scheduled to arrive at 3:35 PM in Beijing but we landed at 4:05 PM due to the slight delay. Similar to our experience at Pudong, we took the bus to the Beijing Capital International Airport T2 which was the same terminal I went through back in 2011.

We spent nearly half a day traveling. Looking back, I would’ve chosen to pay the extra and fly with Philippine Airlines especially after our experience flying home. PAL’s service is miles ahead. Will share more on that soon.