This is some sort of a continuation of my previous post.

When I was booking for my flights within Indonesia, I used Tiket.com. Due to my preference in flight times, my inbound and outbound flights to Semarang were of different airlines. My flight back to Jakarta was with Sriwijaya Air. 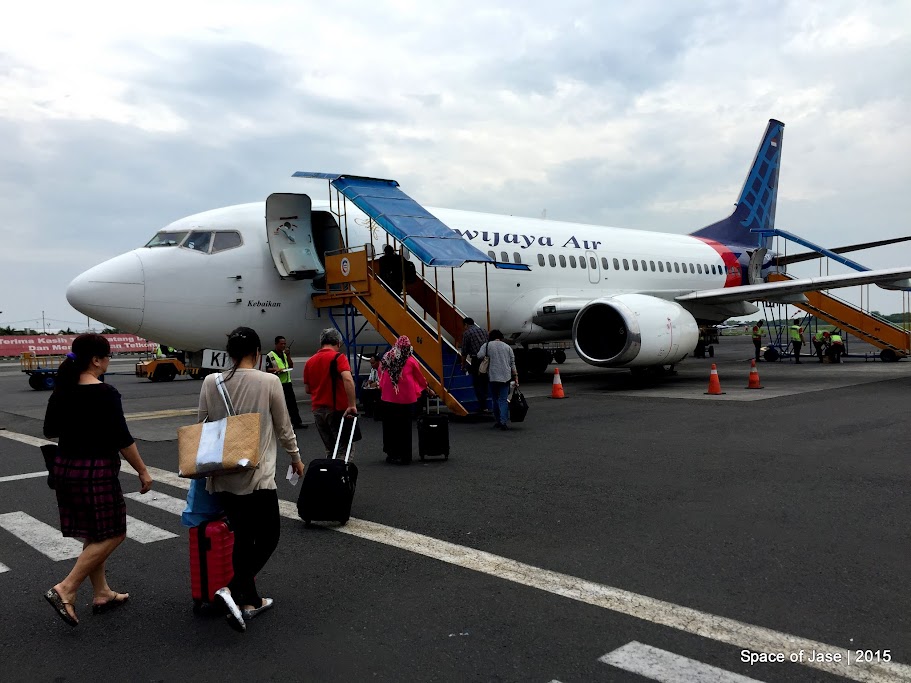 Sriwijaya Air is Indonesia’s third largest airline. It is considered a medium-service airline – not a low-cost carrier but not quite a full-service one. They mostly serve domestic flights but they do have some international flights within Asia.

I was early for my 12 noon flight to Jakarta. Good thing there’s a Starbucks branch at Semarang Achmad Yani Airport. 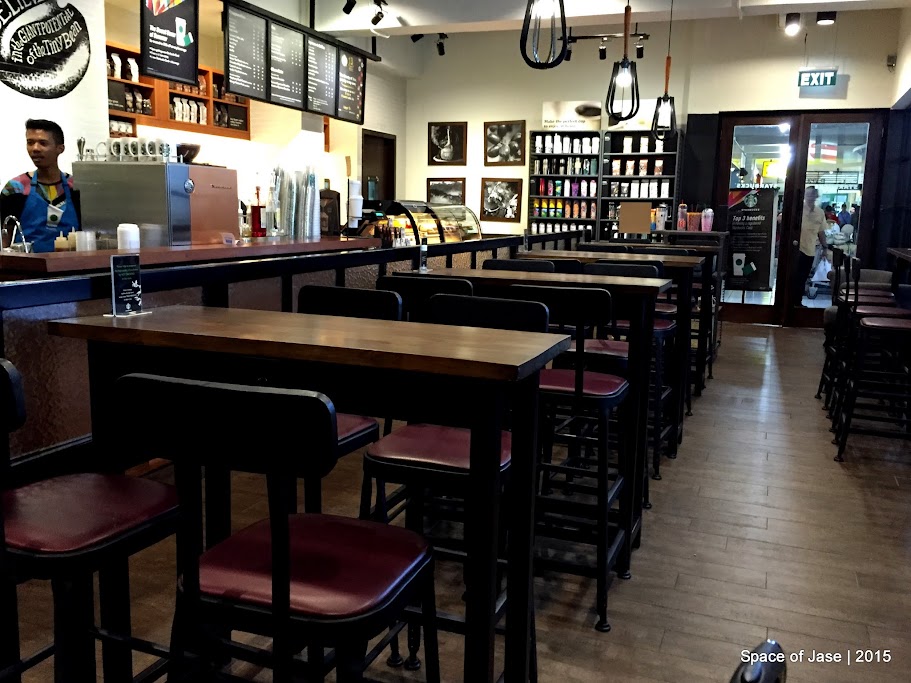 Side note: The staff at this branch of Starbucks were awesome. I feel awful for not remembering the barista’s name but he was great. I liked the ambiance of the Starbucks branch there. 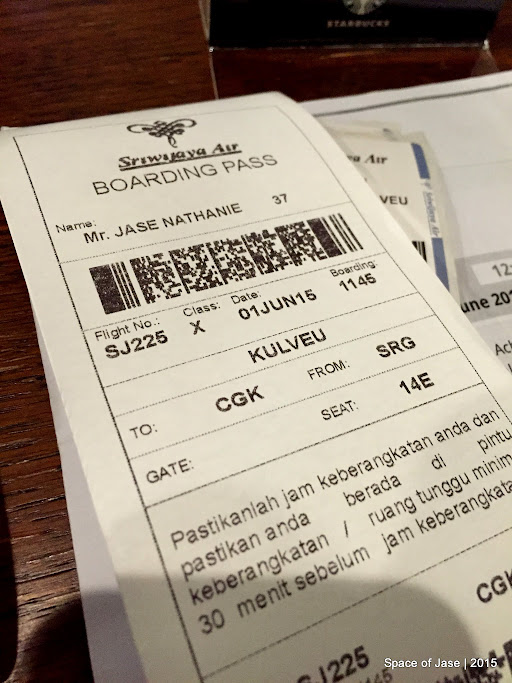 I killed time in Starbucks by going through the photos I took while in Semarang. At around 11:30 AM, I proceeded to the boarding area. 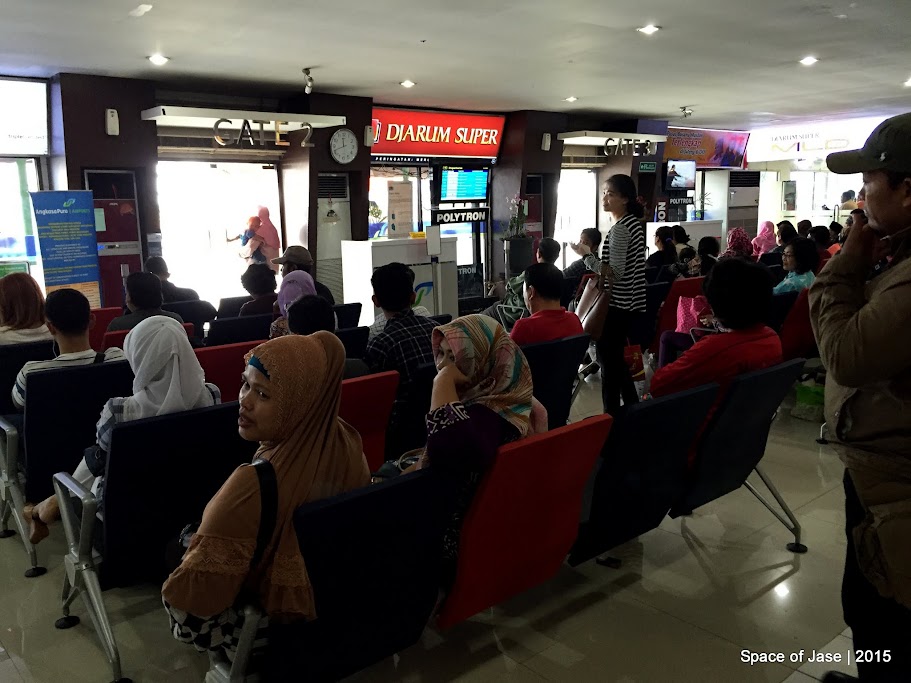 The air side of the terminal is similar to the ones in the Philippines. There were many people inside the terminal where most flights were heading to Jakarta. There were some Surabaya and Batam flights as well.

Anyway, I was wondering why there was only one airplane on the apron. It was almost 11:50 and the Sriwijaya airplane has yet to be seen. Oh well, delayed flight. 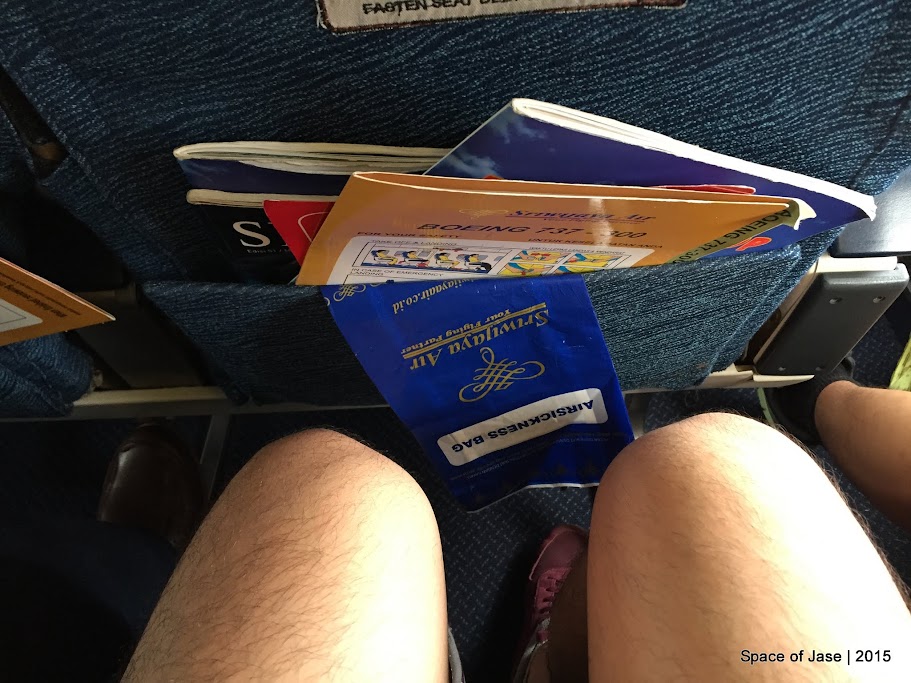 The legroom in the plane was decent. Again, I was seated on the exit row so it’s roomier than usual. The seat beside me was much better though… 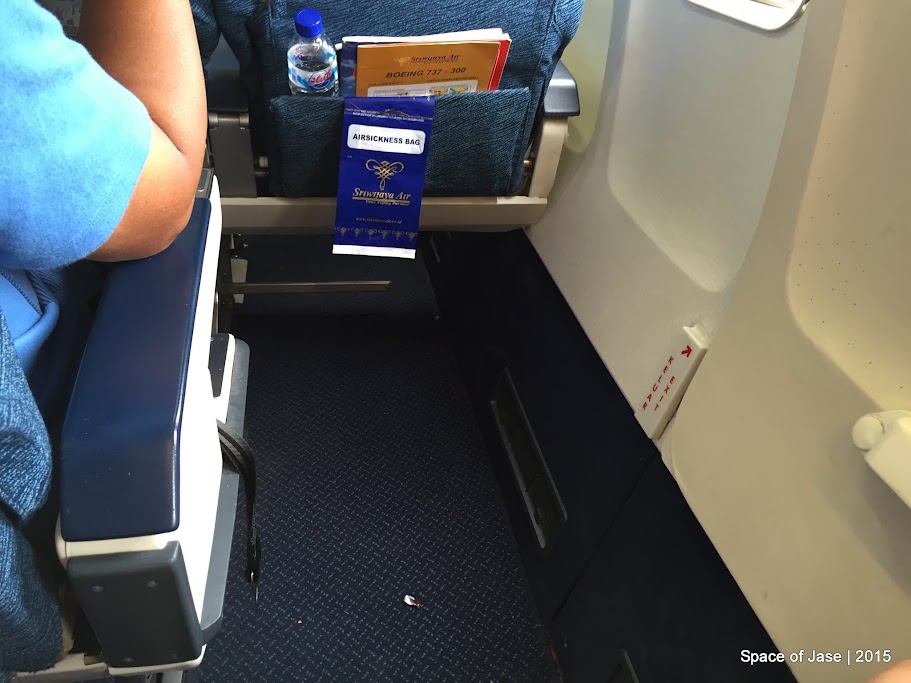 No seat in front!

If you’d notice the photo above, it looks a bit messy. That’s one of the things I noticed about Sriwijaya Air — it seems like they didn’t make any effort in cleaning up from the previous flight. There were biscuit wrappers under my seat as well. 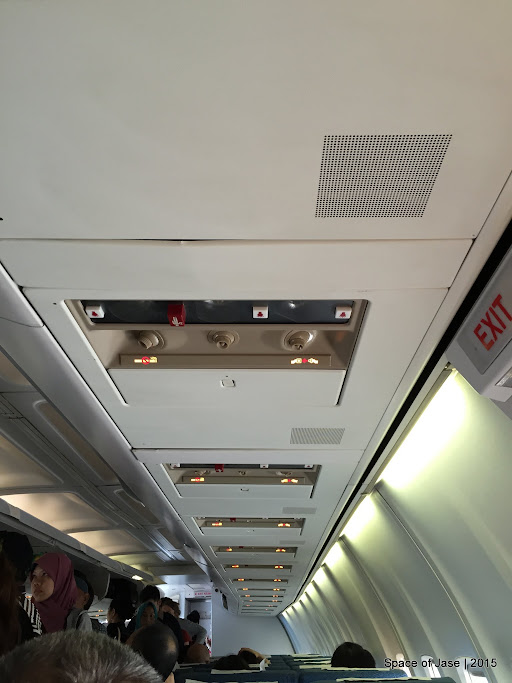 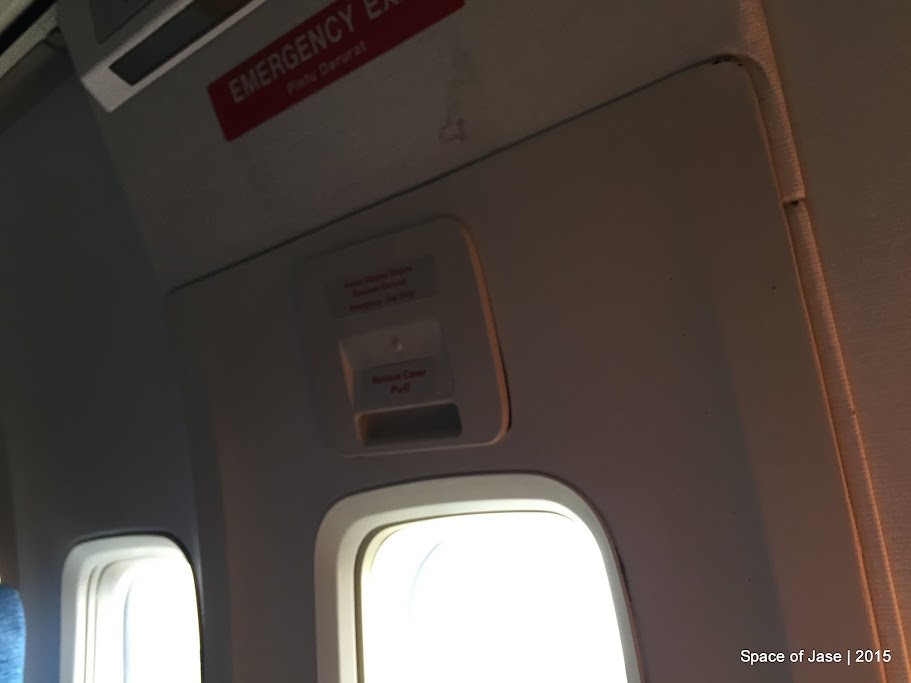 The emergency door looks worn out as well. I wonder if the plane had an emergency situation before. Darurat.

The flight attendants started serving snacks once the seat belt signs were switched off. They gave a pack of wafers and a bottle of water. Not as great as the ones served in Batik Air but good enough for an hour long flight. 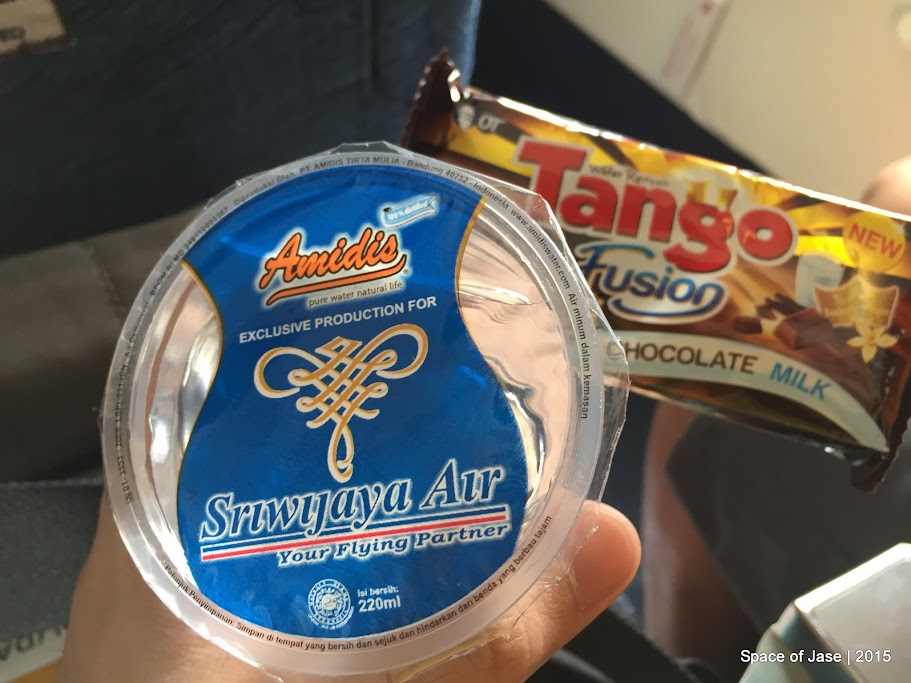 I found their flight attendants a bit rushed though. There was something about them that screamed “I just want to finish my tasks”. When they were explaining the exit row directions, I asked them to speak in English. No luck. I guess I was expecting too much especially after a wonderful experience with Batik Air.

They also have an in-flight shop. 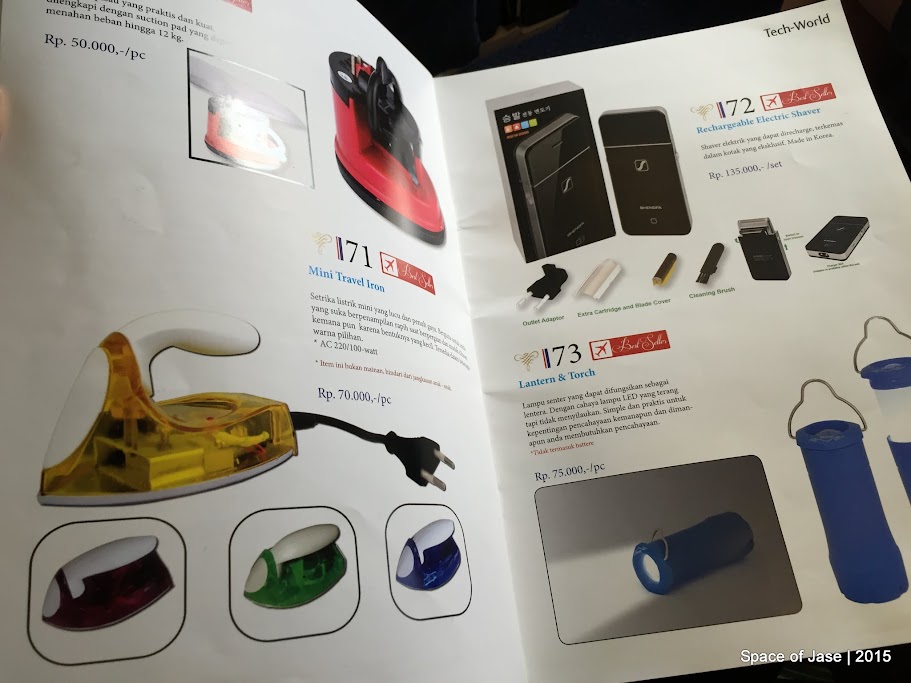 The selection was a bit weird. They’re not the usual branded items you see on international flights. I guess an iron would be useful when traveling.

Anyway, we arrived a little later than expected because of the short delay. I will still probably fly with Sriwijaya Air if there are no Batik Air flights available. It’s not the airline is bad, it was just I had an excellent experience with Batik Air.

3 thoughts on “Trip Report: Sriwijaya Air from Semarang to Jakarta”