If there’s one place in the Philippines that I’d love to go back to, it would definitely be Cebu – the Queen City of the South. I’ve only been there twice, first when I was in 7th grade and the second was more than a year ago with my college friends.

When I was in 7th grade, my mother and I flew to Cebu to visit our boutique in Ayala Center. I remember having a pleasurable stay at the then Cebu Plaza Hotel. Our visit coincided with the Sinulog Festival 2002 so we were able to join in the celebration. 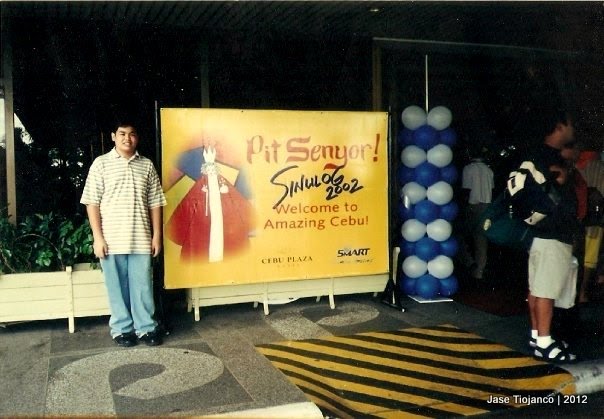 Photo was taken at the entrance of the Cebu Plaza Hotel. Just a few moments before this photo was taken, former president Gloria Macapagal - Arroyo entered the hotel. 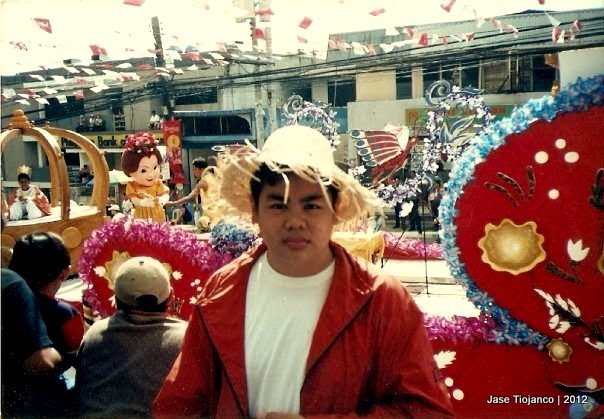 Why do I look sad in this photo? I guess it was because of the heat - and I'm wearing a jacket!

In December 2010, my closest college friends and I took advantage of the promo fares offered by Cebu Pacific. We were fifteen in the group and it was a fantastic experience. The hotel we stayed in wasn’t luxurious like Cebu Plaza but it was good nonetheless. We made the most out of our three-day stay in the city and I enjoyed every moment of it.

This morning, I stumbled upon some of the photos from our trip to Cebu. I was going through them and I ended up staring blankly at the mirror, dreaming of visiting the beautiful city once more.

It was my first time in eight years to ride an airplane. I was obviously excited since I arrived at half past 12 midnight, 6 hours before our departure. It was also my first time stepping inside the ‘new‘ terminal of the Manila International Airport. I waited for my friends at Kopi Roti and bought some food to fill my tummy. We left Manila on time and we arrived in Cebu an hour later.

When we landed in Cebu, the van we hired was already waiting for us. The driver was cheerful, greeting us in Cebuano. Once we’re all inside the van, he brought us to some of the luxury hotels in the Mactan area. On our way to the hotels, I couldn’t help but notice that most of the signage that we saw were written in Hangul or the Korean writing system. We found out later that Cebu’s a popular destination for Koreans.

Before we headed to the city proper, the driver brought us to a park dedicated to Lapu-Lapu. There wasn’t much to see there but it was still a place worth visiting.

Rather than going straight to our hotel, we went to CnT Lechon to have lunch. The whole feast was shouldered by one of our friend’s aunt. CnT is arguably the best tasting lechon I have ever tried, the meat was full of flavor and the skin was crisp.

The little girl was entertained by how those ladies chopped up large roasted pigs into bite-sized chunks.

We immediately headed to our hotel after our belly-busting lunch. The hotel that we booked was Casa Amigo, a budget hotel along Echavez Street. It was pretty bare, but then again, I have no problems as long as the place is secure and the bathroom’s clean.

Casa Amigo - your home away from home.

An hour of rest was enough to get us back to our feet. Next stop, the Taoist Temple.

The location itself of the Taoist Temple is fantastic, it’s on the side of a mountain and you can see the city from there. We enjoyed taking snaps here since there were many interesting parts in the area. We even had the chance to pray and ask for guidance.

You can see the prayer area at the left part of this photograph.

We were just in time for dinner when we got back to the city. We went to the Asiatown IT Park where many BPO offices are being constructed. The Walk was situated there which is home to many restaurants.

One thing that I really, really love about Cebu, is that the cost of living there isn’t high. Eating out at a good restaurant wouldn’t cost more than 200 PhP. We had our dinner in Mooon Cafe, a Mexican restaurant right at the very front of The Walk. The restaurant’s pretty good and the meal that I had was only less than 150 PhP. I was also able to try the Chimichanga my friend ordered and it was really delicious.

After dinner, we went back to the hotel to prepare for our last activity for the night – partying! We headed to Vudu, one of the popular clubs in Cebu and partied all night. I hardly drank though since I always felt that I’m responsible for my friends. Also, I didn’t dance too much. I have no other reason for not dancing aside from being an awful dancer.

We went back to the hotel pretty late, around 1 in the morning. We had to wake up early since our boat reservation for our island hopping adventure was at 10 in the morning. I was given the task of waking everybody up, haha!

We bought our lunch en route to the port. The lechon manok being sold along the streets of Cebu were really delicious! Pair it up with some puso and your hunger problem’s solved.

Going island hopping was fun. There’s something relaxing about being on a boat that I love. The roaring sound of boat’s motor is often drowned out by the flow of thoughts that rush in as I admire the sea.

One of the beautiful islands that we 'hopped' on to.

We stopped at certain points but I really didn’t go swimming. Not that I don’t know how to swim, it’s just that I enjoyed taking photos more. We were also entertained by the boatmen who took random sea creatures for us to see.

A stab at taking a creative photo. Nah, I suck at photography yet I want to make it as my hobby. Haha!

We had a really good time out in the sea. As always, I enjoyed being able to think deeply. We headed back to land and went to our next stop: the Crown Regency Hotel.

The Crown Regency Hotel is popular for their Sky Walk and Edge Coaster attractions. By the way, the hotel is the tallest structure in Cebu City. Riding the Edge Coaster give you a 360-degree view of the country’s ‘second city‘. The Sky Walk, on the other hand, allows you to walk around a ledge near the top of the building and do some wacky poses while they take your photos. We availed of their package which costs 600 PhP that includes both the Sky Walk and an Edge Coaster ride.

CURSOR pose with my CURSOR friends

I enjoyed the Edge Coaster more than the Sky Walk mainly because I found it more thrilling. Shame though that my friend didn’t want to go ‘all the way‘ – meaning adjust the cart’s position to make it face the ground.

We ended our second day with a dinner out in one of Cebu’s most well-known restaurants – Casa Verde. We were supposed to dine in at the main branch of Casa Verde but it was already closed when we got there. We were informed that the branch at The Walk was still open so we headed there.

Casa Verde’s a winner. Seriously, their Brian’s Ribs platter is one of the best ribs I’ve ever eaten. See that huge slab in the collage above? That costs less than 200 PhP. The ribs were juicy and rich in flavor. How I wish that Casa Verde would set up a branch here.

We went to La Marea Pastry Shop afterwards for some dessert. I bought a personal Concorde cake from them and ate it when we got back to our hotel room. The cake was delicious, better than Sugarhouse’s take on the cake. 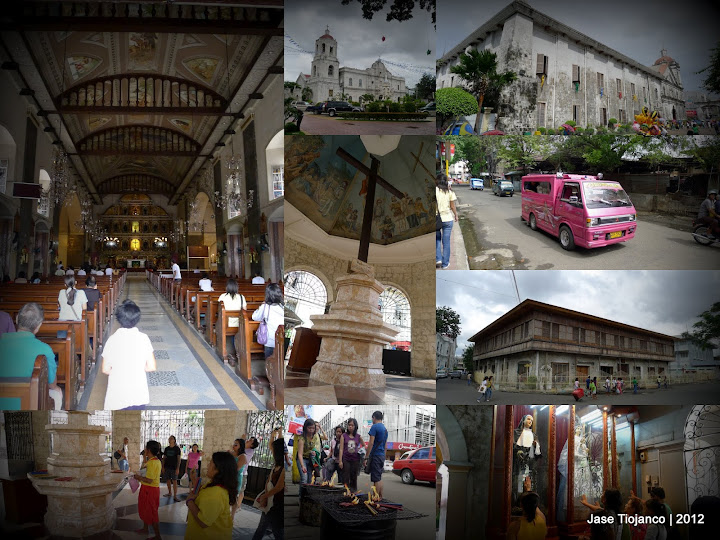 On our third and last day in Cebu, we went around Cebu City on foot to see some of the places of interest that we missed. We also used our remaining time in the city to buy pasalubong.

Just a tip, if you’re offered a candle or two by one of the ladies inside the structure where Magellan’s Cross is, politely refuse. They’d charge you 20 to 50 PhP for each candle after doing a dance ritual that would supposedly bless the candles.

I bought the usual pasalubongs from Cebu – danggit (dried fish) and otap (flaky biscuits). We then headed to Ayala Center Cebu to unwind a little before heading to the airport.

I was shocked when I saw Ayala Center Cebu. It’s very different from the one I visited 8 years earlier. I loved how Ayala reinvented the place, especially the Terraces part. In my opinion, the overall feel of Ayala Center Cebu is much better than Greenbelt.

Sadly, the time for us to go back to the hustle and bustle of Metro Manila came. I loved every moment of our short and sweet vacation. I really hope I can come back to Cebu soon.

Pasalubong for my family - a box of CnT Lechon. Delicious!

2 thoughts on “Dreaming of Cebu”