This is the first post regarding my recently-concluded trip to the Indonesian capital — Jakarta.

A few months back, I was nominated for an enablement by my then manager in Software Lab Services. It was a training on IBM FileNet P8 4.5 Java API Programming. I thought it would be the usual training to be held in the Learning Services area of IBM Plaza.

As I read the spreadsheet and looked for the training ID to check the schedule, the location column caught my attention. Jakarta. I thought I was being fooled my vision so I read the whole row again. Jakarta.

I’m going to Jakarta! I’m finally going out of the Philippines for the very first time! 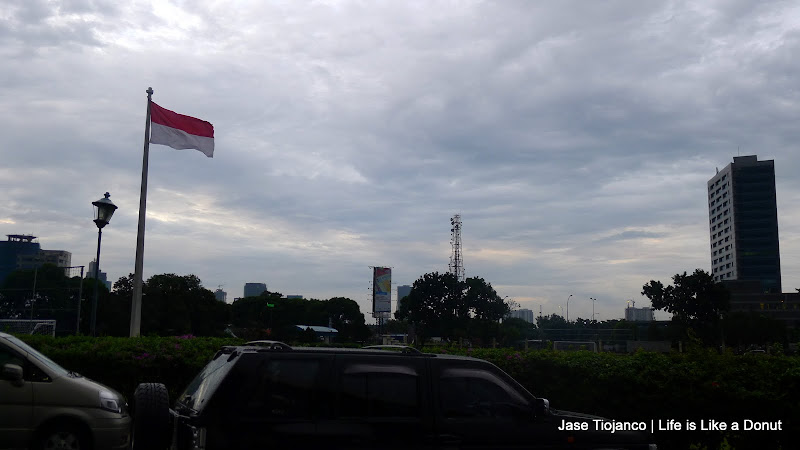 The flag of Indonesia. Photo taken from Wisma Aldiron.

Getting to the point of me finally going to Jakarta was a roller coaster ride to say the least. I enrolled in on-line Indonesian lessons since there are only a few English speakers in Indonesia. I prepared my travel request forms and have them approved. The training was postponed numerous times before finally having a set date. Three days before my scheduled flight, I was informed that I won’t be going to the training anymore due to some problems with the travel form approvals. On Friday last week, I already sent an e-mail to IBM Education in Indonesia stating that I am canceling my slot for the training. Five minutes after that e-mail, I was informed that I’d be going after all.I was booked for a 7 AM flight to Jakarta. Which airline? Asia’s first, Philippine Airlines. My sister told me the night before that she’d be picking me up so I can spend the night in her condominium so that she and her boyfriend could bring me to the airport. Yey! 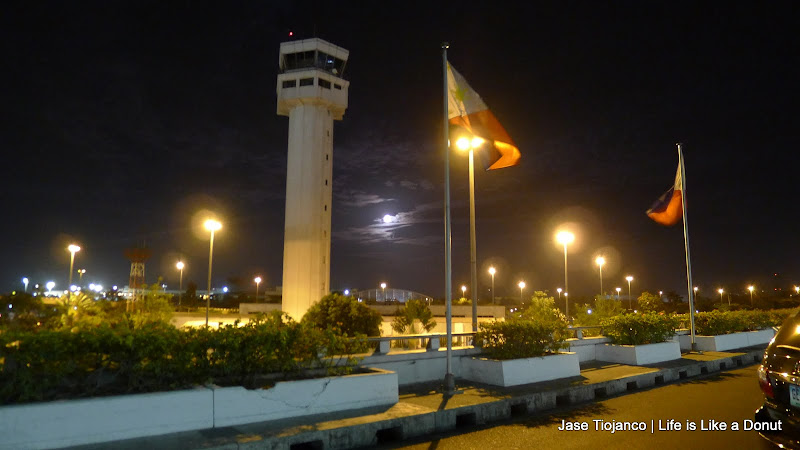 The unusually large moon as seen from NAIA Terminal 2. 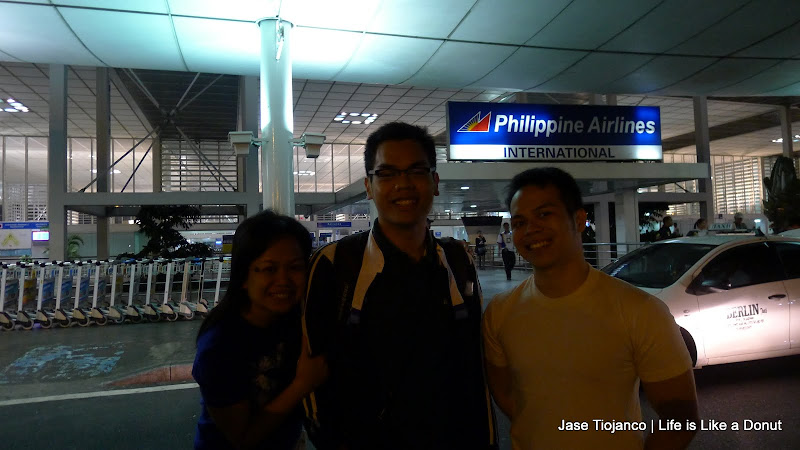 Photo with Kuya Wa and Ate Maja in front of the entrance of the International Wing of NAIA T2. 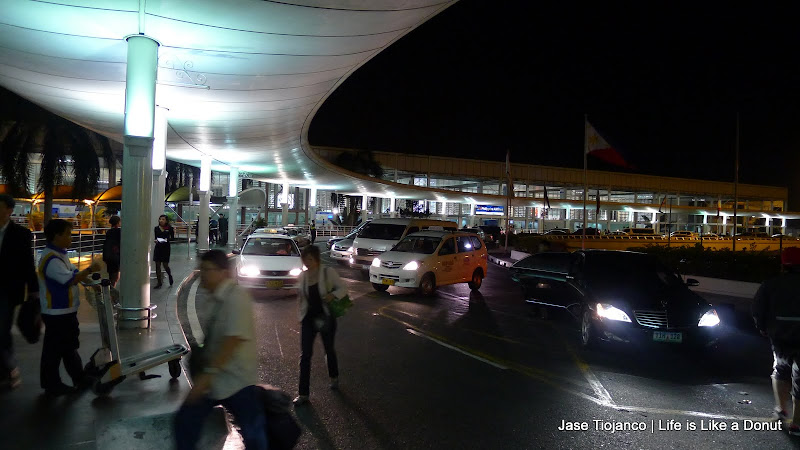 I really like the design of NAIA T2. Its the best looking NAIA terminal in my opinion.

Being a first time international flier, I have little idea of what to do. I instinctively went straight to the luggage check in counter. I looked for the counter with a Jakarta sign and queued up. The line was quite long but waiting for my turn was bearable. 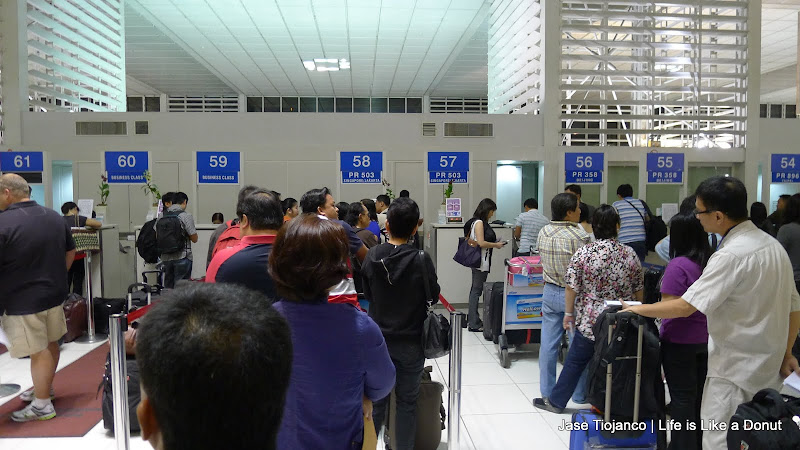 I was a little worried because I didn’t have US Dollars with me. I need US Dollars so I can exchange them for Indonesian Rupiahs when I arrive in Jakarta. I was sure that only a few would accept the Philippine Peso in Jakarta. The help desk told me that the money changers open at around 6:30 – not good. I have to board at least 20 minutes before the flight. Thank goodness Allied Bank opened at around 6 AM. I bought $155.

Right after having some money exchanged, I headed to the immigration where I spent a lot of time waiting. Goodness, couldn’t they speed up the process? It was almost 6:30 when I got past immigration. I made a dash to the gate where the plane to Jakarta is. 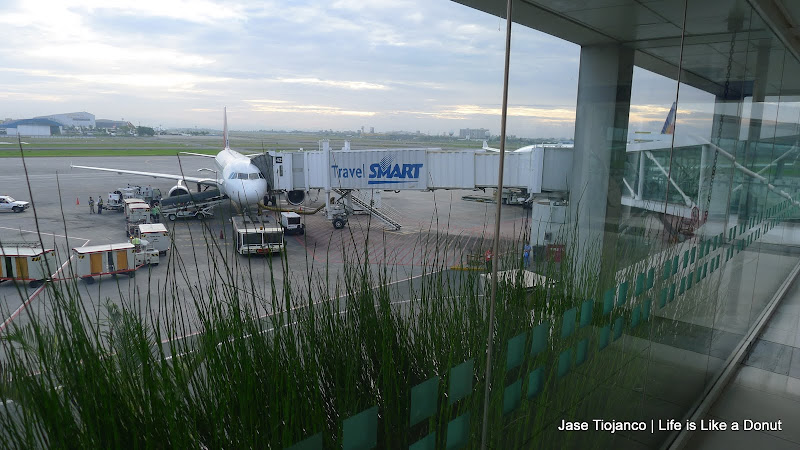 Yes, even though Im supposed to be rushing I stopped to take a photo of the plane I was about to board into. Again, NAIA T2 looks so much better than NAIA 3 in my opinion.

You can just imagine how relieved I was when I finally got into the airplane. I placed my backpack in the overhead bin and sat down. First thing I did? I checked out the magazines in front of me. One magazine, Fiesta, was for the in-flight duty free store, the other was the Mabuhay magazine. 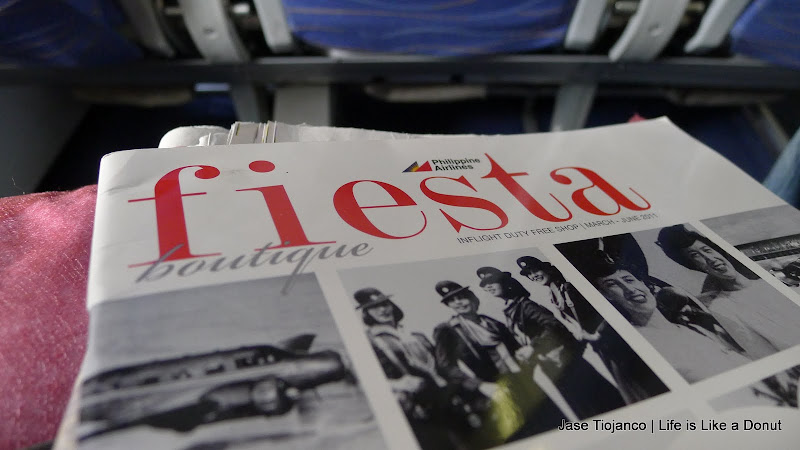 We took off a few minutes past 7 o’clock. Being a morning flight, they served breakfast immediately after the seat belt lights went off. I got the Chicken Adobo meal. It came with bread, fruits, and ensaymada. 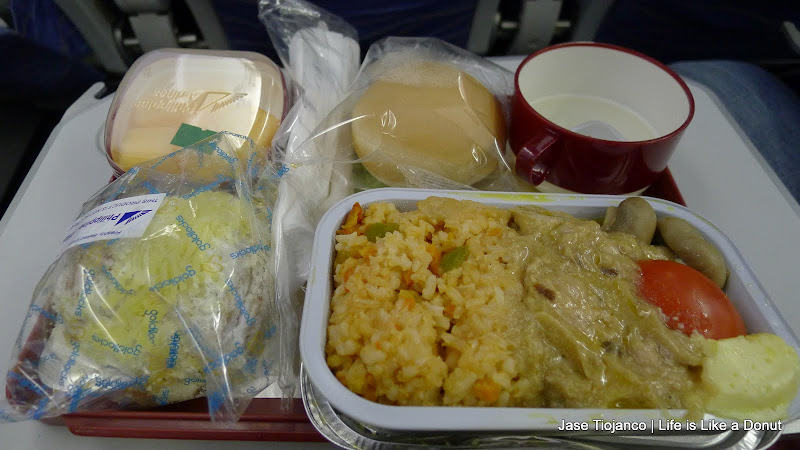 Contrary to popular belief that airline meals arent good, this ones actually delicious. Or maybe I was just hungry.

After three hours, the plane landed in Changi Airport in Singapore. Goodness, that airport is leagues ahead of NAIA. For one, it looks very clean and well kept. 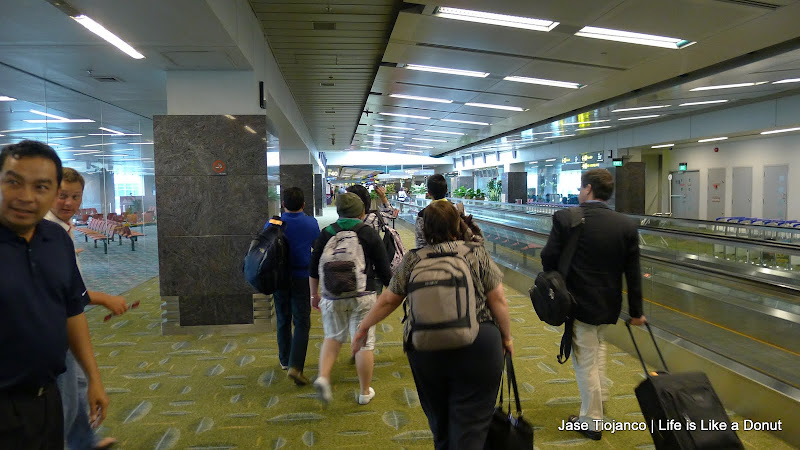 We were required to disembark for security reasons. Changi Airport looks so clean and sparkly. 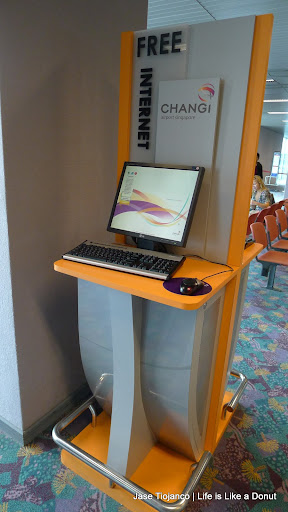 They have an internet station, cool! I think theres something like this in Mactan International Airport. 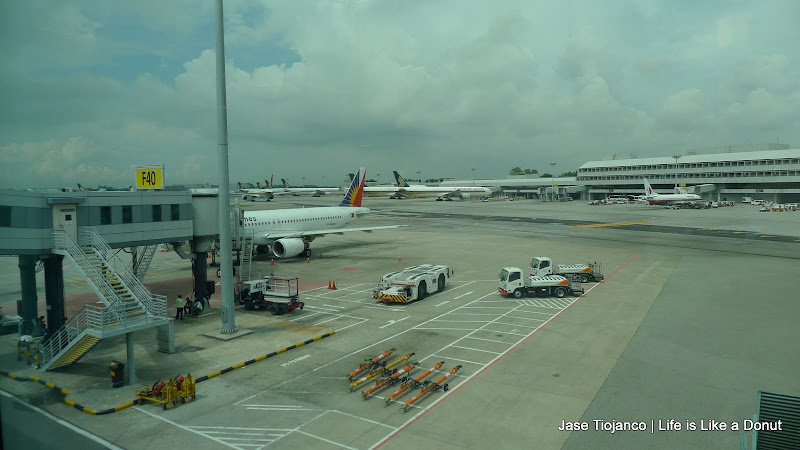 Within an hour, we were asked to board the plane again. It was a shame since they asked us to board a minute after I started using the internet station, haha. I was able to update my Twitter and Facebook though.

After settling down, an arrival/departure card and customs declaration form were given to the passengers. I filled it up as soon as it was given to me. Snacks were also distributed immediately. 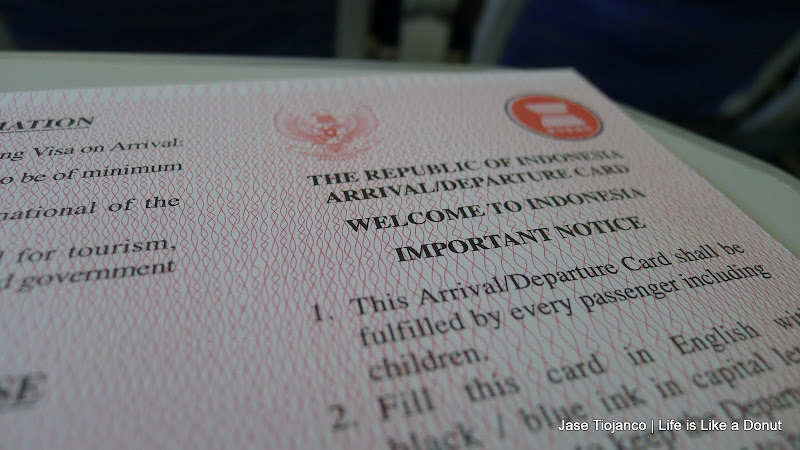 The arrival/departure card of Indonesia. 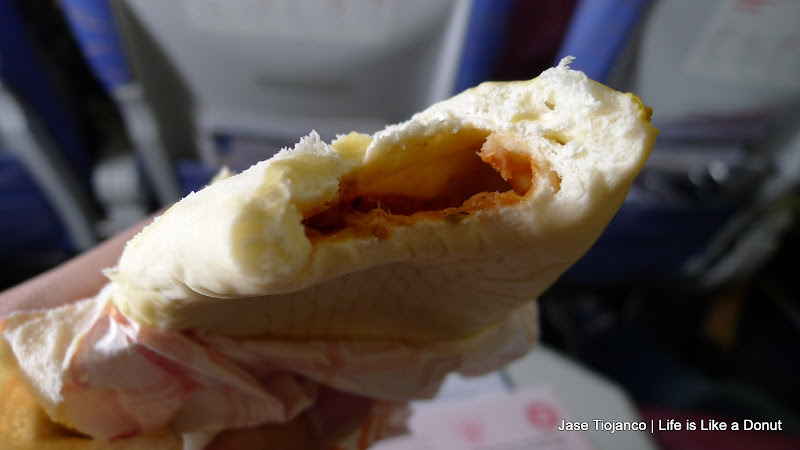 Snack time! The bread was filled with corned beef. Simple but good. 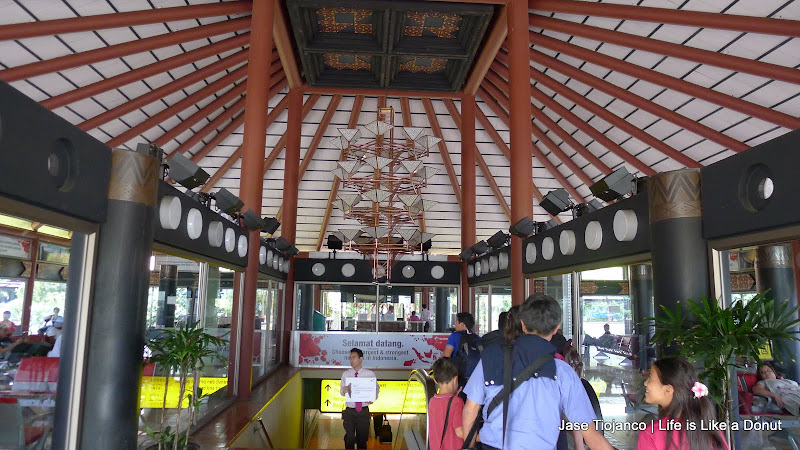 This is what welcomed us upon arrival in Soekarno-Hatta International Airport. I found the airport very elegant and spacious. 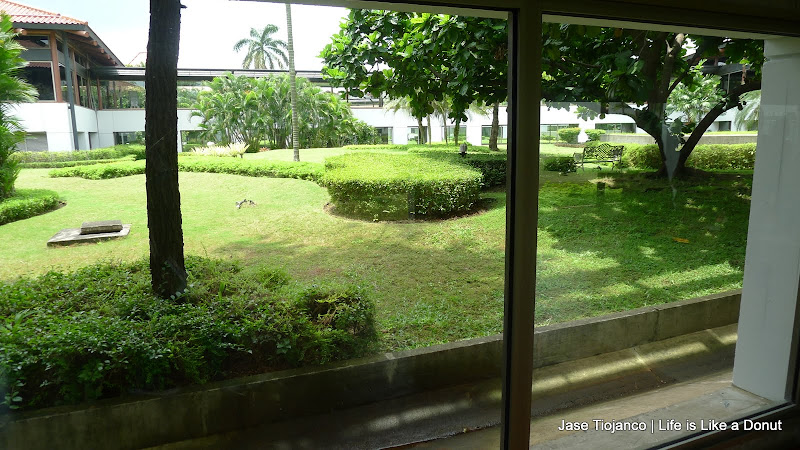 There were pockets of green inside the airport. How I wish NAIA had the same to make it feel less stressful. Maybe they can do that to Diosdado Macapagal International Airport. 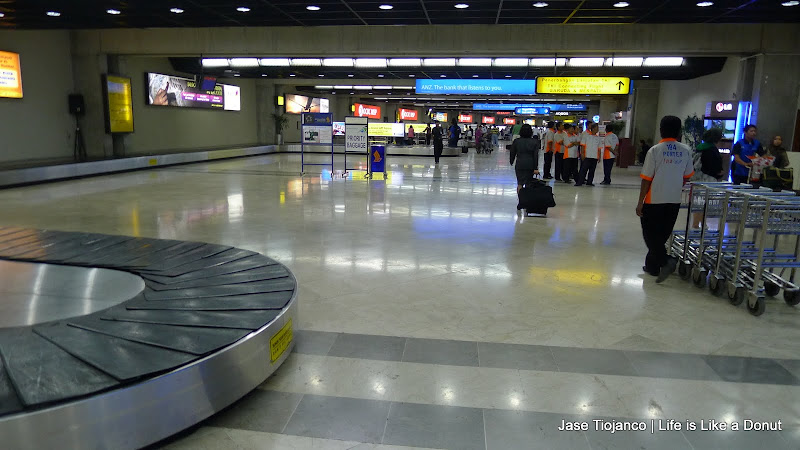 Waiting for my luggage. This area looks a bit old and the conveyor belts were squeaking a bit

I couldn’t remember if I asked for a transfer service from the airport to Mandarin Oriental so I had to boot up my laptop and check. Also, I exchanged $100 for its Indonesian Rupiah equivalent. When I checked the travel request form and saw that I didn’t have a transfer service reservation, I went to the Silver Bird booth and inquired how much it would cost for them to bring me to the hotel. They gave me options, including an S-Class Mercedes Benz, but I opted for the cheapest one which was a Toyota Kijang, also known as Innova here in the Philippines. I paid 261,000 IdR for the service inclusive of the toll fees. By the way, Silver Bird is a taxi company under the Blue Bird Group. The Blue Bird Group is the most trusted name in transportation in Indonesia. 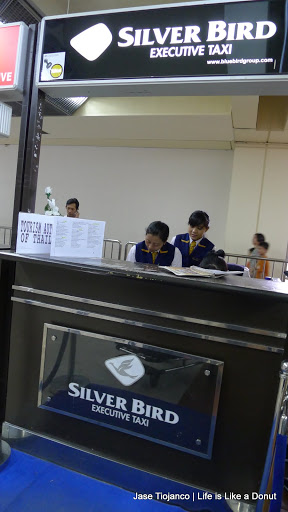 Silver Bird booth. The people behind the counter were extra nice and helpful. 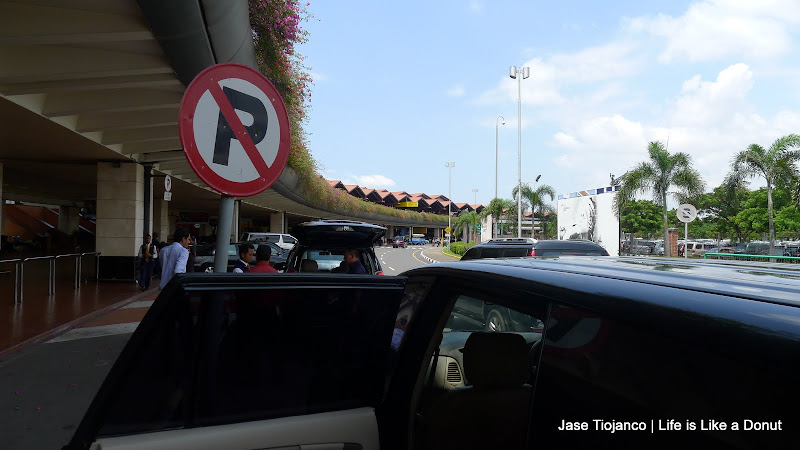 When I got into the taxi, I was surprised to see that the steering wheel was on the right side. I thought Indonesia was a left-hand drive country. The driver of the taxi was very friendly. He knew little English, I knew little Indonesian. Thank God for hand gestures and pseudo-sign language! Initially, he thought I was Indonesian. He spoke to me in Bahasa so I responded by saying “Saya tidak mengerti.” – a phrase that I’d be using quite a lot during my entire stay in Jakarta since I’m always mistaken for a local. He asked some questions just to avoid having some dead air. The trip from the airport to Mandarin Oriental was around 45 minutes. 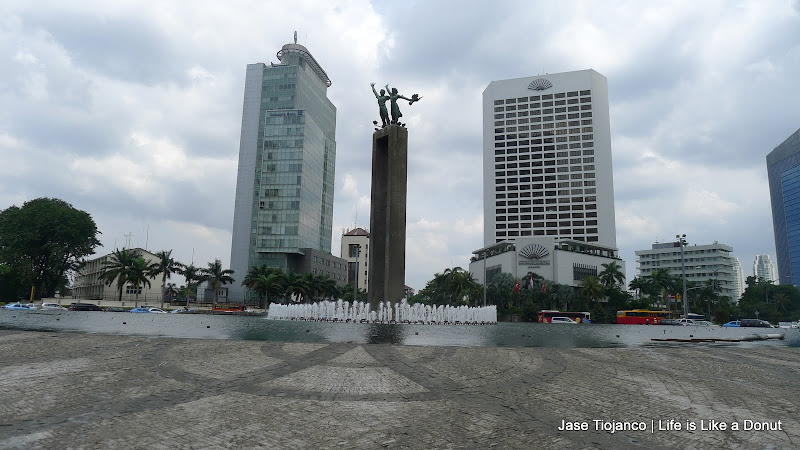 Monumen Selamat Datang in Thamrin. I fell in love with this fountain. Its very beautiful, isnt it? Oh, Mandarin Oriental!

The staff of Mandarin Oriental Jakarta were very friendly. Each of them remembered my name! I seriously don’t know how but whenever I pass by they would greet me by my name. The way they welcomed me was nice, providing me with a cool wet towel and a glass of iced tea. 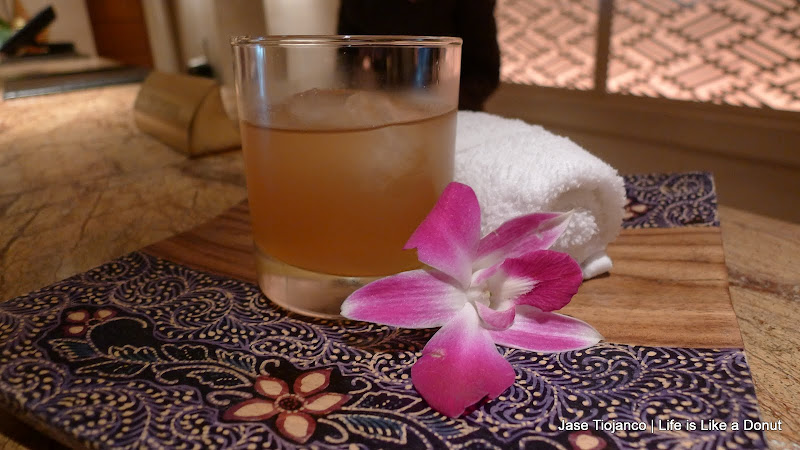 While they were processing my reservation, I asked Seren, the receptionist, for a room with a good view of the Monumen Selamat Datang. She gladly considered my request and after processing my reservation, she accompanied me to my room. To my surprise, my room was located on the 23rd floor fronting the roundabout. She toured me around the suite and chatted with me for a bit before leaving. The room was oozing with luxury! Every bit and piece in the room were of good quality. 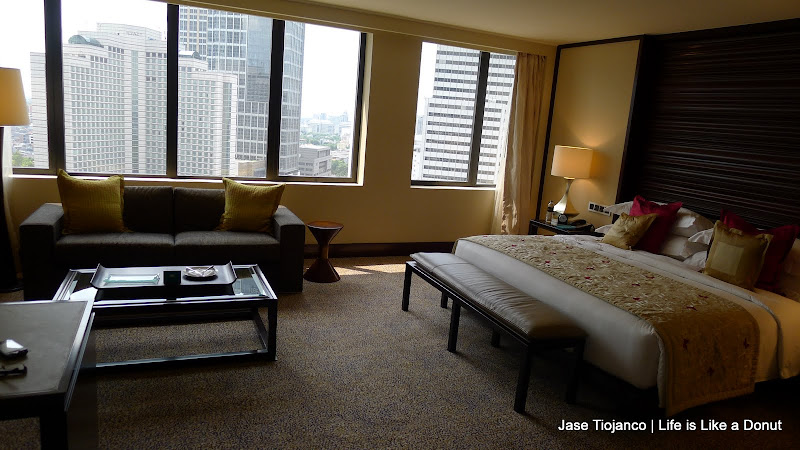 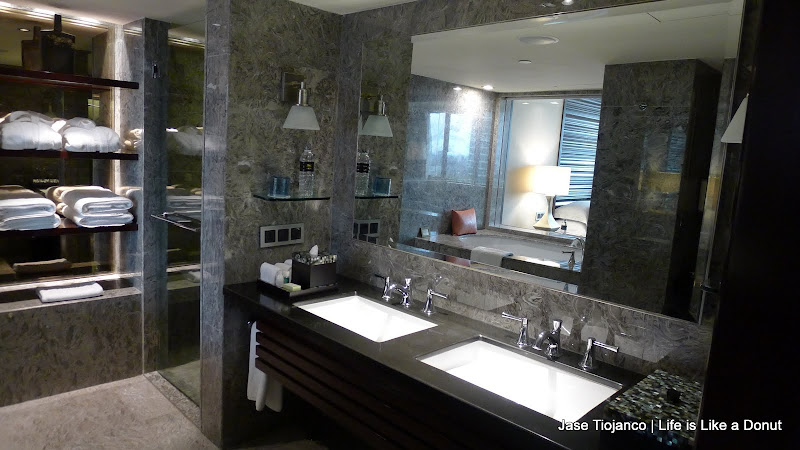 The bathroom of my hotel suite. Lovely. 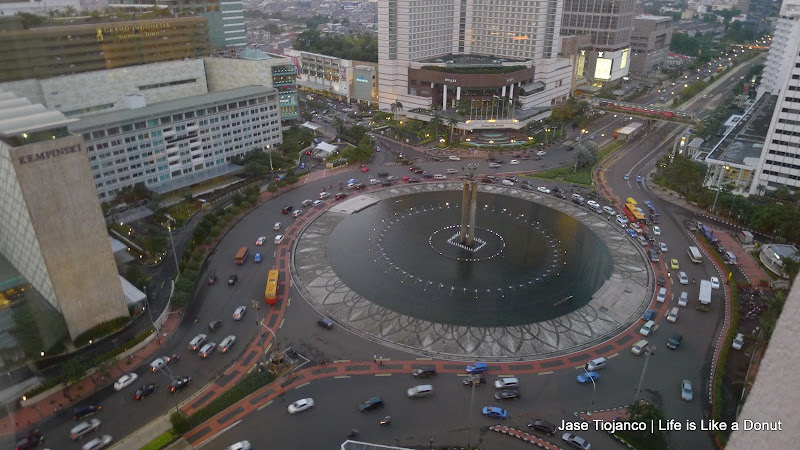 Fantastic view of the Monumen Selamat Datang. I didnt get tired looking at it on a daily basis.

That’s it for now. This entry became a long one! I’ll be posting a second entry about my 6-day stay in Jakarta.

6 thoughts on “Journey to Jakarta”