I’ve been staying with my sister for the past few weeks since she had a minor operation. We usually have food delivered for dinner and we’re getting a bit tired of fast food. So last Saturday, my sister and I decided to eat somewhere special.

She and her special someone ‘discovered’ a restaurant along E. Rodriguez Jr. Ave. in Pasig City and she wanted me to try it out as well. I was wondering where the restaurant then suddenly, surprise! Mom & Tina’s Bakery Cafe! As I said, it’s along E. Rodriguez Jr. Ave. and spotting it is somewhat difficult. It’s building is located in a lot beside the House of Minis, a landmark much easier to spot.

The place isn’t big nut it’s not small as well. Most of the people there exude a certain ‘sosyal‘ aura though the restaurant’s menu doesn’t cost an arm and a leg. The interior is very cozy and has this homey feel. I particularly like their couches which are really comfortable. 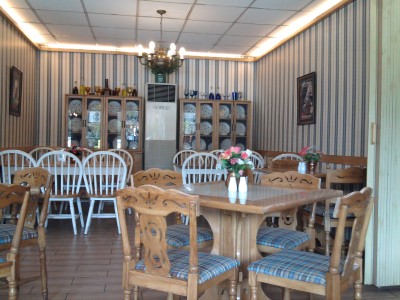 The food at Mom & Tina’s are very delicious. We ordered their Caesar Salad as appetizer and Paella Valenciana and Chicken and Chips as main dishes. As I have mentioned earlier in this entry, the prices of the food there aren’t expensive, ranging from 200 – 250 pesos.

The vegetables in the salad were crisp and very fresh. The dressing was just right and it complemented the greens very well. We only ordered half a serving and I was wanting more salad after eating it all up.

I found the Paella Valenciana really good! I rarely, as in RARELY eat seafood but I absolutely enjoyed the shrimp and the mussels in their paella. The rice was perfectly cooked and the serving was good enough for me and my sister. 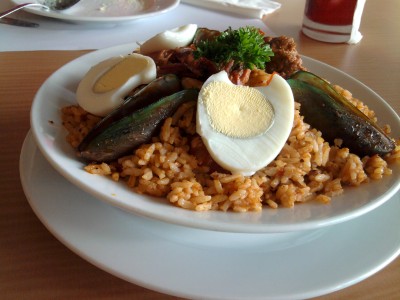 The Chicken and Chips was okay, it was nothing spectacular. I still believe that the Chocolate Kiss Cafe in UP Diliman has the best Chix in a Basket. The chicken strips were probably from the thigh part though I was hoping it was breast fillet. The strips were cooked just right and the dip went well with the chicken.

And of course, my favorite part of every meal – DESSERT! I ordered their Toblerone Walnut Torte while ate ordered a chocolate cake, sadly, I forgot the name.

The Toblerone Walnut Torte was amazing. As in, amazing’s even an understatement. At first I was a bit disappointed since it didn’t look special. It was in a plastic container and it looked like a cup of chocolate mousse from KFC.  But lo and behold, when I took my first bite, heaven! Seriously, it was that good. Every bite is a mixture of smooth and chunky. The Toblerone and walnut bits were fantastic with the mousse. 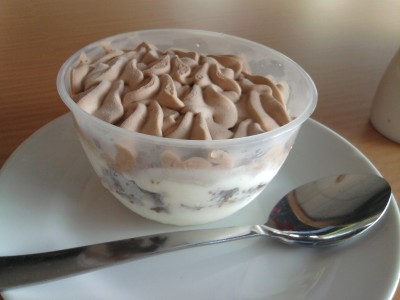 Chocolate Walnut Torte, a must try!

The chocolate cake was good as well. The cake itself was very moist and the caramel frosting was yummy. I ended up eating my sister’s cake as well since she was already full. Okay, so what ever happened to my Project Beach Fit?

Oh, I almost forgot to mention… Their lemonade is blue! Haha! I’m not sure if they’re freshly squeezed lemonade with blue coloring or just a blue lemonade juice mix. It did remind me of Liquid Sosa.

Anyway, if you happen to be hungry and you’re somewhere near or along E. Rodriguez Jr. Ave, do try Mom & Tina’s. It’s a hidden gem!